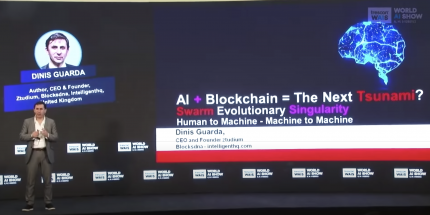 Dinis Guarda is an author, writer, artist, academic, B2B2C tech influencer, inventor and serial entrepreneur. Dinis is a world-renowned thought leader,  strategist, futurist and speaker, an International Bestselling Author, and a media personality who covers the pressent and future of business, technology and society. Dinis is a World Class Leader in multiple fields and has a passsion to push ideas, action and technology together to create better solutions, narratives and paths.

Dinis Guarda has decades of experience in international business, C level positions and digital transformation. Dinis has worked with new tech, cryptocurrencies, drive ICOs, regulation, compliance, legal international processes, and has created a bank, and been involved in the inception of some of the top 100 digital currencies.

Dinis has created various companies such as Ztudium tech platform a digital and blockchain startup that created the software Blockimpact (sold to Glance Technologies Inc) and founder and publisher of intelligenthq.com, hedgethink.com, tokensdna.com and tradersdna.com. He has been working with the likes of UN / UNITAR, UNESCO, European Space Agency, Davos WEF, Philips, Saxo Bank, Mastercard, Barclays and governments all over the world.

He has been a guest lecturer at Copenhagen Business School, Group INSEEC/Monaco University, where he coordinates executive Masters and MBAs.

He is ranked as one of the most influential people in Blockchain in the world by Right Relevance as well as being listed in Cointelegraph’s Top People In Blockchain and Rise Global’s The Artificial Intelligence Power 100. 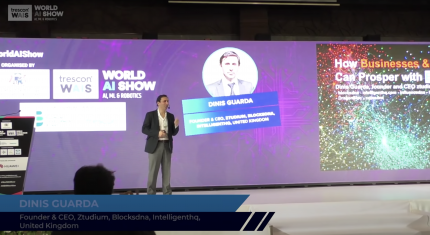 Dinis Guarda was born in Portugal. His family is from Portuguese and French background. He has lived in Portugal, France, Sweden and Denmark and is based in London, UK since 2011.

He coursed his BA in Languages and Literature from the Universidade de Lisboa between 1992 and 1997 and achieved a Master in New Media from London South Bank University in 2011. Dinis has lived in Sweden and worked in Denmark prior to moving definitely to London.

Dinis started his professional career back in Portugal in 1997 as the Founder Member for the cultural organisation Número – Arte e Cultura and created the arts and fashion magazine NumeroMagazine between Lisbon and Paris with Didier Fiuza Faustino https://fr.wikipedia.org/wiki/Didier_Faustino, Still in Portugal, he collaborated with Alcatel and the Portuguese Government Department of Technology and Development UMIC between 2003 and 2006. He was also involved with the Portuguese government as Curator and Project Manager, for the Portuguese Presidency of Republic in 2006 and 2007.

Moving to London he worked as Strategy Project Manager, Account Manager and Analyst at Greenlight Digital, until 2008. That same year, he became Global Head of Content, SEO and Social media at Saxo Bank until 2011. While he was working at Saxo Bank, he founded one of the world’s first fintech, social trading platforms tradingfloor.com.

In 2011, he founded Ztudium Limited group that have created the affiliated techabc and open business platform.

Ztudium created and manages the technology and AI – blockchain-based FinTech solution blocksdna, the media intelligenthq and lifestyle and healthcare platform as a service software lifesdna.

Ztudium features a publishing division that manages intelligenthq.com, hedgethink, and tradersdna among others.

Between 2014 and 2015 he was involved in creating a fabbanking.com a digital bank between Asia and Africa as Chief Commercial Officer and Marketing Officer.

Dinis is involved as a strategist, board member and advisor with the payments, lifestyle, blockchain reward community app Glance technologies. For this company he built the blockchain messaging / payment / loyalty software Blockimpact that he sold in 2017. He is an advisor and small shareholder of Hyperloop Transportations project.

He is a shareholder of the Fintech social money transfer app Moneymailme and math edutech gamification children’s app Gozoa.

Dinis first passion and specialisation was in literature, arts, poetry and started publishing magazines and books when he was 14 years old. Dinis did his Master in new media, digitisation and transforming knowledge in content, using social media and digital transformation in his studies in London South Bank University. He has been lecturing at Copenhagen Business School, Group INSEEC/Monaco University, where he coordinates executive Masters and MBAs in fintech, social media, blockchain and AI and others for business executives. He has been invited to give guest lecturers at Cambridge University, Harvard University and King’s College.

Dinis has been recognised as a leading global thought leader and author, personality in blockchain, AI and Fintech  in social media by data analytics reports by companies like Thinkers360, Onlaytics, Rise, and many others. RightRelevance search engine platform has highlighted his profile on a in depth 2016 -Blockchain (Aug 1 – Sep 20): Twitter Analysis Twitter data research Analysis, using the following methodology ‘topical influence’ or Tribes by measuring the quality of network connections within the context of a ‘topic’ and ‘engagement influence’ or Flocks by measuring quality and quantity of engagements (RTs, mentions, replies), reach of tweets etc. within the context of an event or trend. This report highlights Dinis Guarda digital presence as number one personality in the world during the time of the study. 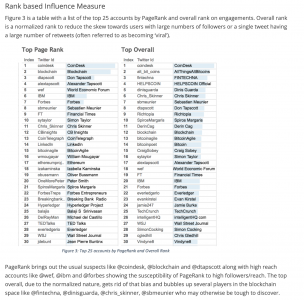 list of the top 25 accounts by PageRank and overall rank on engagements, report is a summary of graph analysis of engagements and conversations including retweets, mentions and replies over 1.5 months on Twitter around Blockchain source Blockchain analysis collateral in the form by RightRekevance.com, Tableau Online Dashboard, Gephi Communities Graph Visual. The analysis methodology is outlined at http://54.244.44.22/insights

Dinis Guarda is listed in various global fintech, blockchain, AI, social media industry top lists as an influencer in position top 5/10/20 within global first 100 rankings as well as being highlighted in some of the lists as Cointelegraph’s Top People In Blockchain in 2019, Rise Global’s The Artificial Intelligence Power 100 and he is ranked or listed as one of the most influential people in Blockchain in the world by Right Relevance and as “30 Most Influential People in the Blockchain Space” by Crypto Compare. 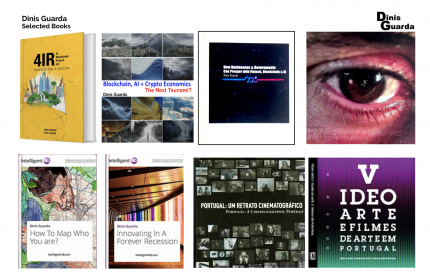 Dinis Guarda List of Selected book, clockwise: 4IR AI Blockchain, Fintech, IOT – Reinventing a Nation; Blockchain, AI + Crypto Economics – The Next Tsunami; “How Businesses and Governments can Prosper with Fintech, Blockchain and AI?”; Fast Forward Body; How To Map Who You Are; Innovating in a Forever Recession; Portugal a Cinematographic Portrait; Video Art and Art Films in Portugal.

Dinis has published numerous books and articles in publications such as intelligenthq.com, tradersdna.com, hedgethink.com, openbusinesscouncil.com, cityam and many more.

His last book with Rais Hussin 4IR AI Blockchain, Fintech, IOT – Reinventing a Nation; Blockchain, AI + Crypto Economics – The Next Tsunamican be found in its own website 4irbook.com

More information about Dinis Guarda career and sources on the platform openbusinesscouncil.org