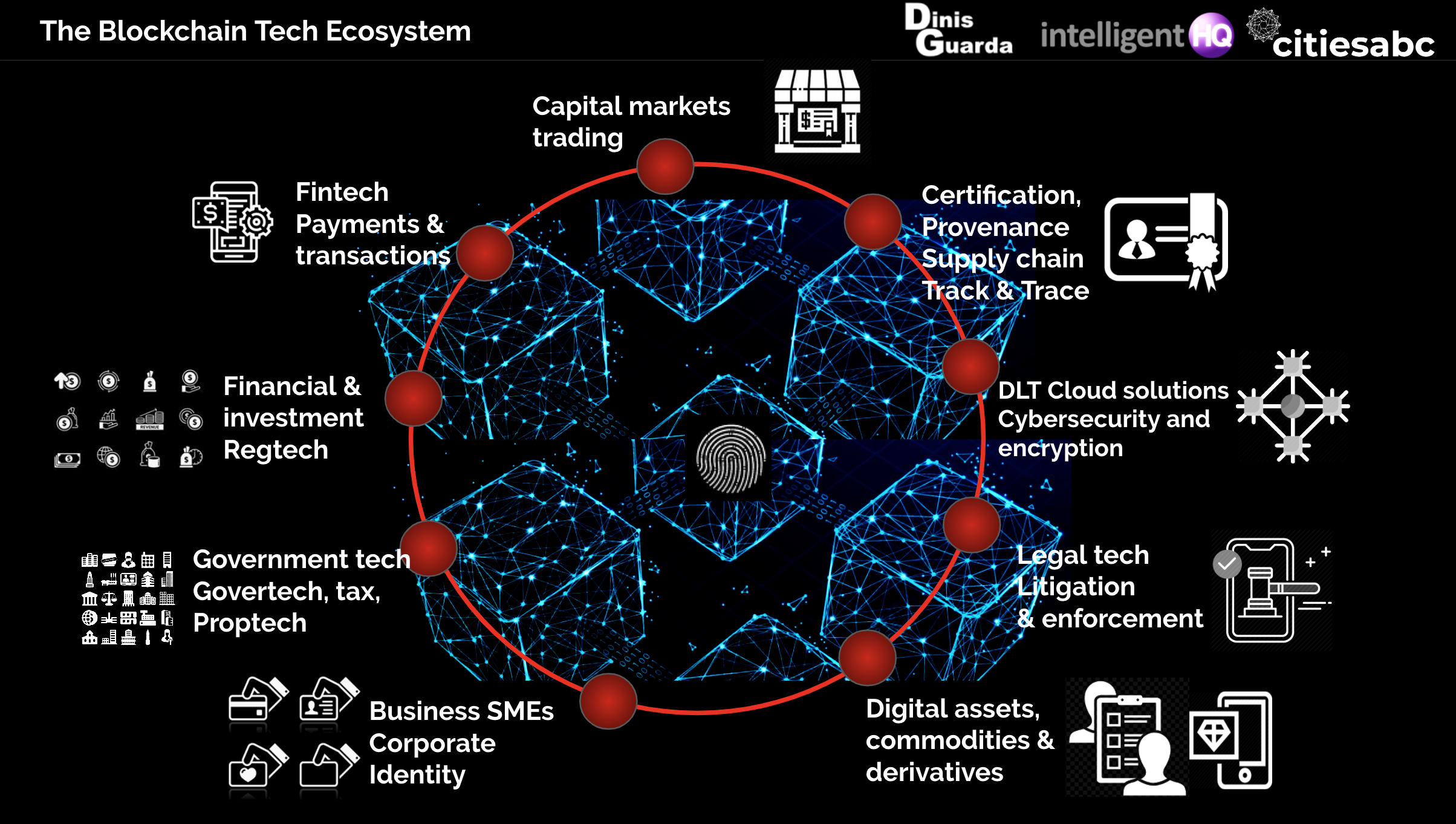 What makes Blockchain Technology so special

Blockchain also known as a new leayer of Internet of trust is a foundational P2P technology that coming out of encryption was developed in a way that increases transparency of digital transactions, as everybody on the network has a copy of it in the registering ledger. Being more than a technology Blockchain is also an ideology the aims to decentralise systems and society. This tech oofers solutions that once a transaction is registered, it can order anything from any part of the world register or payment on the blockchain distributed ledger. Privacy, based on encryptions and additional smart contract technology related, on blockchain is another major feature that makes blockchain, also known as distributed ledger technology that makes it so special.

What can Blockchain technology be used for?

Blockchain technology has multiple ways to be used and can be used to create a permanent, public, transparent ledger systems for compiling data, registrations, certification on financial operations, supply chain, education, governmental infrastructure, sales, tracking digital use and payments to content creators, such as wireless users or even film, art and music.

Blockchain is a foundational technology based on distributed database existing on multiple computers, so called nodes at the same time. This technology can be scalled in private and public blockchain ecosystems and can be constantly growing as new sets of transaction recordings, or ‘blocks’, are added to it. Each ledger block contains a timestamp and a link to the previous block, so they actually form a chain and keep a track record that is registered, irreversible and not posssible to change.

What is Blockchain technology in plain English?

Blockchain technology has been defined as a digital ledger in which registered transactions are recorded chronologically and publicly. Each block of the registration is a record of transactions of specific data, which can contain anything from financial transactions, digital currencies – Cryptos, to government and education certification, to voting records to medical and healthcare data. 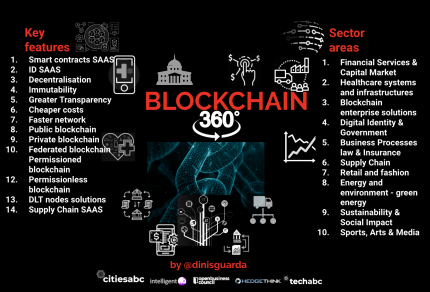 From encryption to Bitcoin to Distributed Ledgers

The Bitcoin blockchain can be thought of as a continuously updated spreadsheet of who owns Bitcoin, a public record of every transaction involving Bitcoin, secured through encryption and consecutive block to block ‘hashing’ (a concept that will be explained in a later chapter). Anyone can view the spreadsheet, but no one can edit past interactions or add in false information.

To “sign” (claim ownership of) a block of Bitcoin, a user on the network needs to solve a deceptively complex equation. These equations require miners to determine an unknown point (the “private point”) on a function in 2d space, given only another point on the line (the “public point”), using scalar functions. When I describe mining equations as complex, I do not mean that they require some great creative genius to solve. Bitcoin mining uses a family of algorithms called Elliptical Curve Digital Signature Algorithms (or ECDSA for short). These problems are composed of using an elliptic curve and a finite field to “sign” data in such a way that third parties can verify the authenticity of the signature while the signer retains the exclusive ownership of the signature.

To add insult to injury, every two weeks the difficulty of the mining process is increased. I encourage readers to explore the math underpinning this revolutionary technology further, but any truly in-depth examination is beyond the scope of this book.

Users who solves these mathematical problems are coined “miners,” an analogy to the discovering of Bitcoin by mathematical signature. Theoretically, these miners could be anyone but in reality they tend to be software engineers or Crypto enthusiasts with powerful computers designed expressly to solve these equations.

When a “problem” is solved (on average about every 10 minutes), 25 Bitcoin are awarded to the respective miner (or miner pool), and one new block enters circulation. Each new block is attached to the blockchain in chronological order, incorporating an encrypted portion (or ‘hash’) of the previous block. This process is analogous to a blacksmith building a chain (hence the chain in blockchain): each link is connected through the next such that the breaking of one link destroys the chain.

Each node (computer connected to the Bitcoin network using a client to validate and relay transactions) downloads automatically all new information on the Bitcoin network. This structure enables any user on the blockchain access to complete information about every single address and transaction right from the genesis block first mined by Nakamoto.

The environmental concerns of this mining process is worth touching on briefly. specialized computer ‘farms’ (the majority of which are located in China) operate 24 hours a day, seven days a week. It is estimated that the worldwide consumption of electricity by bitcoin miners is equivalent to the consumption of 3.4 million U.S. households. Even context to these equations is not indicative require disproportionate amounts of computing power to solve than to verify.

A Brief History of Distributed Ledgers

Ledgers are as old as writing. Tally sticks, clay tablets, stone, papyrus, paper, and now computer bits have all at one point in time acted as a medium for record keeping. At its height, the Roman Empire controlled a territory spanning from Scotland to Syria, a territory they were able to hold in part because of an advanced financial system where an individual could deposit and withdraw in any location within the empire. A universal currency allowed investment, finance, and real estate, and the banks of the Roman empire expanded their distributed ledger technology with prescriptions, the precursors to modern cheques.

Records dating to the early stages of the Qing Dynasty indicate an equally complex distributed ledger system. In ancient China, Piaohao (draft banks) came into existence as trade grew in complexity and scale. Money transfers between provinces became not only common practice, but a necessity for the growing empire. Originating in Shanxi Province, these first financial branches were known as Shanxi banks.
At the height of their influence, 32 Piaohao were united by distributed databases, with over 475 branches extending across China and in rare instances, crossing into the peripheries of Japan, Mongolia, Russia, and the Malay Archipelago.

Churches in fifteenth century England would often have a book of scripture kept in a specific location inside the building that was openly accessible to churchgoers. in a time where books were rare and made on an individual basis, the church ledger defined theology for the parish.

A distributed ledger is a database synchronized across multiple institutions, a connected link of open books. Think of banks, governments, individuals, or ‘nodes’ (technical jargon for devices like computers, cell phones, etc.) who keep synchronized records across geographical lines. With a distributed ledger, each connected institution has access to the ledger via copy or a connection to the database. Any changes made on any of the ledgers will, by definition, be reflected on all existing

Some important dates in the history of blockchain

2000
Stefan Konst publishes his paper on theory of cryptographic secured chains, plus ideas for implementation

2014
Blockchain technology is separated from the currency and its potential for other financial, interorganisational transactions is explored. Blockchain 2.0 is born, referring to applications beyond currency

The Ethereum blockchain system introduces computer programs into the blocks, representing financial instruments such as bonds. These become known as smart contracts.

2016
Publication of Blockchain Revolution: How the Technology Behind Bitcoin Is Changing Money, Business, and the World by Don Tapscott, Alex Tapscott

The Bitcoin’s role on blockchain technology

Blockchain owns a lot to the inception of Bitcoin. Posting their seminal whitepaper in 2008 and launching the initial code in 2009, Nakamoto created bitcoin to be a form of cash that could be sent peer-to-peer without the need for a central bank or other authority to operate and maintain the ledger, much as how physical cash can be.

While it wasn’t the first online currency to be proposed, the bitcoin proposal solved several problems in the field and has been by far the most successful version.

The engine that runs the bitcoin ledger that Nakamoto designed is called the blockchain. The term came from that and become maisntream to all the different solutions offered by this technology. The original and largest blockchain is the one that still orchestrates bitcoin transactions today.

Other blockchains include those that run the several hundred “altcoins” – other similar currency projects with different rules – as well as truly different applications, such as:

Ethereum: the second largest blockchain implementation after bitcoin. Ethereum distributes a currency called ether, but also allows for the storage and operation of computer code, allowing for smart contracts.
Ripple: a real-time gross settlement system, currency exchange and remittance network, based on a public ledger. 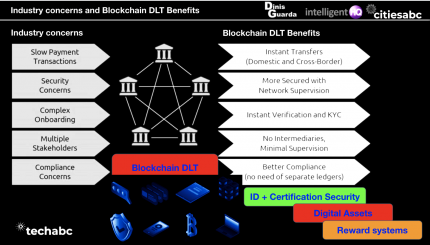 Blockchain – Distributed Ledger and assiciated possibilities and technologies are without any doubt the biggest tcehnological disruption in the history of society and tech. Blockchain establishes and brings a new landscape where:

Blockchain: Reawakening the Dream Of A Decentralised World Wide Web?

Blockchain: Reawakening the Dream Of A Decentralised World Wide Web ?

Blockchain Plus AI The Present Future of Tech Part 1
https://www.intelligenthq.com/blockchain-plus-ai-the-present-future-of-tech-part-1/ via @intelligenthq