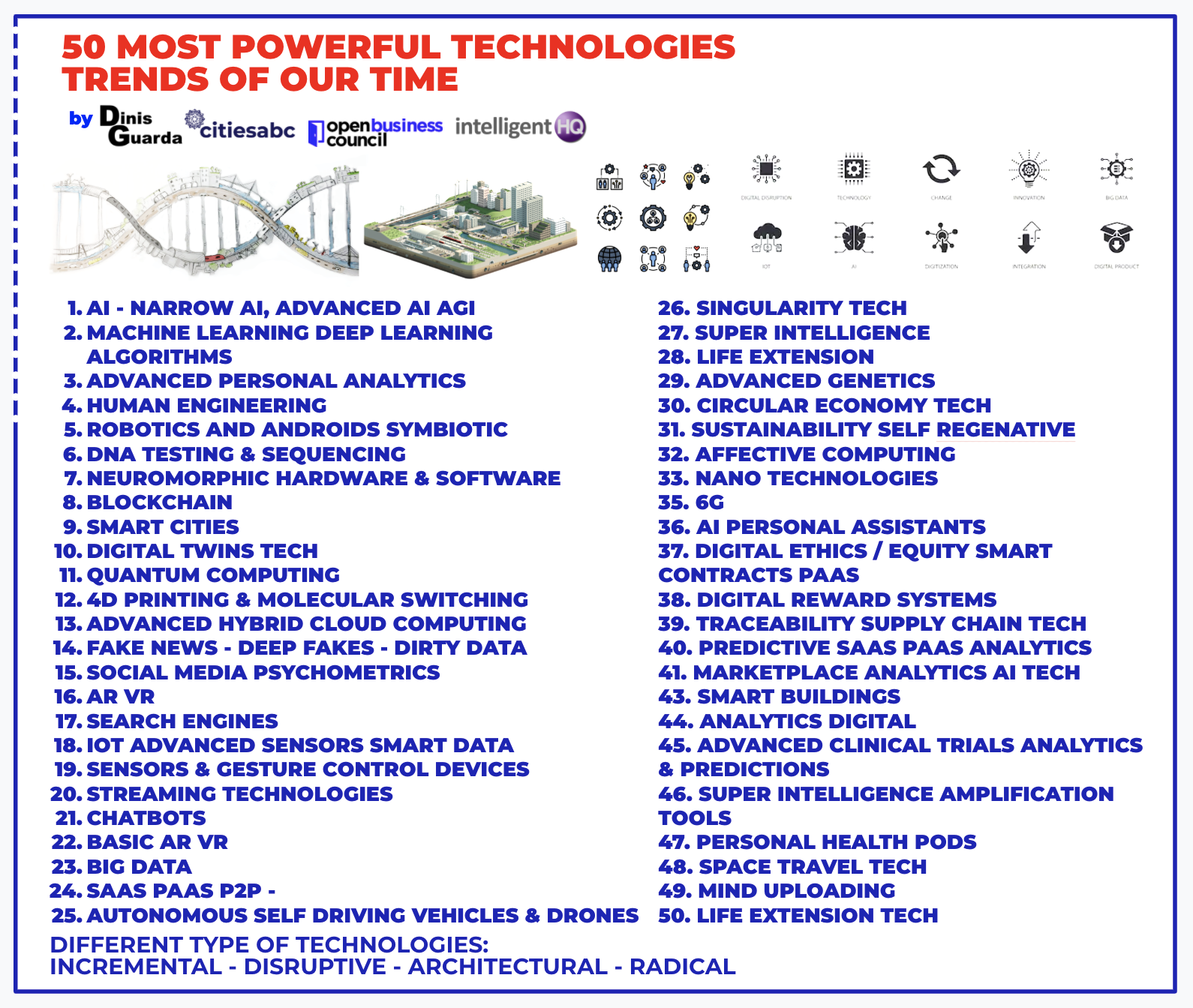 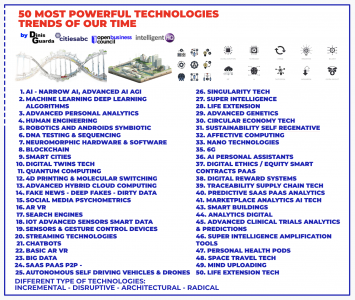 50 Most Powerful Technologies Trends of our Time, infographic research by Dinis Guarda

“Everybody is a genius. But if you judge a fish by its ability to climb a tree, it will live its whole life believing that it is stupid.” — Albert Einstein

“Our technology, our machines, is part of our humanity. We created them to extend ourselves, and that is what is unique about human beings.” Ray Kurzweil

What are the most powerful technologies of our society 5.0 times? How can we cope with them?. The concept of society 5.0 is a vision of a future human centred society, nature where technology is used for the best possible outcomes. Society 5.0 is not about one single country or city. It is about humans, the planet and a balanced sustainable ecosystem.

As we speak Human society and intelligence is being vastly amplified, changed and augmented by AI. Even with our basic forms of narrow AI we are already seeing the biggest disruption of human society with manipulation of entire societies with social media, fake news and dark data. This to add to our financial and capital markets that as we speak are all run by algorithms and deep learning / machine learning SAAS and PAAS.

We can define technology as the application of tools, scientific knowledge for concrete practical uses, this happens in social aspects of our society life and especially in business and industry. When we speak about technology we tend to talk about “advances in technology, computing technology” and many forms of tools, machinery and equipment developed from the application of research, invention and based on practical and scientific knowledge. The usage of technologies can and is normally used to solve a specific problem and reduce a society and its many sectors, the industry’s ability to use a solution to develop a tool and use a budget on a new technology or set of innovation tech.

Nowadays in Society 5.0 we tend to define technology as a set of tools and innovations we use in the branch of knowledge dealing with engineering or applied sciences put in practice for our society. Society 5.0 where we live has a large and complex global population. According to recent data from the United Nations (2019) the world’s population is expected to increase by 2 billion persons in the next 30 years, from 7.7 billion currently to 9.7 or over 10 billion in 2050. The same research estimates the world population in 2100 to be 10.9 billion. But the predictions vary according to different projections. 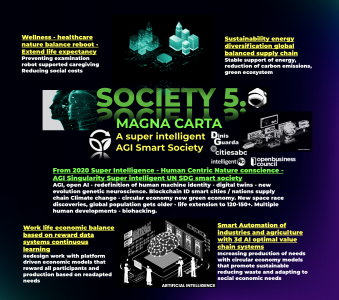 “Seventy thousand years ago, homo sapiens was still an insignificant animal minding its own business in a corner of Africa. In the following millennia it transformed itself into the master of the entire planet and the terror of the ecosystem. Today it stands on the verge of becoming a god, poised to acquire not only eternal youth, but also the divine abilities of creation and destruction.”
Yuval Noah Harari

As we speak in our society we are building different types of technologies and innovations. Most of these iterations of our technology work and innovation can be perceived and processed in these categories:
Incremental;
Disruptive;
Architectural;
radical;
Exponential.

But going forward the exponential disruptive technologies will be part of the acceleration that will shift humanity more in the next 50 years than in all the different stages of humanity. When we define exponential technology we tend to look at two things: the technology is exponential. And this technology or technologies in each period doubles in capability or performance. The second thing is this is a technology that is now at the point where its budget price-performance makes it possible to solve today’s society and business problems in ways that were not previously possible.

The increasingly more powerful exponential technologies of our time include artificial intelligence (AI) and all its different applications and foundational architectures. Another one critical is blockchain, not just a technology on its own but as a concept and a set of applications and solutions from smart contracts to digital assets and provenance solutions. Finance and technologies – fintech is the biggest technology industry in the big digital and tech driven world of finance, payments and banking. Other powerful technologies include quantum computing, augmented and many others such as virtual reality (AR, VR), data science, digital biology and biotech, medicine, nanotech and digital fabrication, networks and computing systems, robotics, and autonomous vehicles.

“The race to obtain the data is already on, headed by data-giants such as Google, Facebook, Baidu and Tencent. So far, many of these giants seem to have adopted the business model of ‘attention merchants’. They capture our attention by providing us with free information, services and entertainment, and they then resell our attention to advertisers. Yet the data-giants probably aim far higher than any previous attention merchant. Their true business isn’t to sell advertisements at all. Rather, by capturing our attention they manage to accumulate immense amounts of data about us, which is worth more than any advertising revenue. We aren’t their customers – we are their product.
(…)
Leaders are thus trapped in a double bind. If they stay in the centre of power, they will have an extremely distorted vision of the world. If they venture to the margins, they will waste too much of their precious time. And the problem will only get worse. In the coming decades, the world will become even more complex than it is today. Individual humans – whether pawns or kings – will consequently know even less about the technological gadgets, the economic currents, and the political dynamics that shape the world. As Socrates observed more than 2,000 years ago, the best we can do under such conditions is to acknowledge our own individual ignorance.”
Yuval Noah Harari

These top 50 technologies are now run by organisations and corporations that are leading the world and controling our social, health, financial, economics and data human resources.

The first constitutional treaty of our times was the Magna Carta. Magna Carta, the Latin words for “Great Charter” (literally “Great Paper”), also known as Magna Carta Libertatum, was an English 1215 document charter which limited the power of the than English Monarchs, specifically King John, from absolute rule.

The Magna Carta document was the ultimate result of disagreements between the Pope and King John and his noble barons over the rights of the king. This document and treaty Magna Carta was drafted and written as a requirement to the king to find a balance and renounce certain rights and respect certain legal procedures. the document aimed to make the king accept that the will of the king could be bound by law. Magna Carta is still today highly important. Magna Carta is widely considered to be the first step in a long society historical process leading to the rule of building a social and documentation constitutional law.

To deal with all the present challenges of our society 5.0 and all the powerful technologies and companies that are managing them and that are changing our society like never before we need a new Society 5.0 Magna Carta architecture. 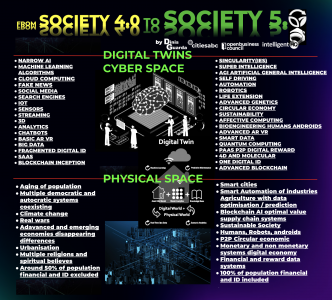 From Society 4.0 to Society 5.0, research infographic by Dinis Guarda